New Michigan School for the Deaf in Flint is cutting-edge 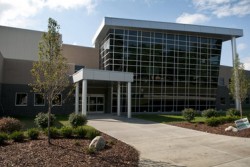 FLINT, MI – In the art teacher’s room, giant walls of glass rise to the ceiling, filling the room with light.

In the gym, projectors display game scores and other announcements for the students and spectators, most of whom would struggle to follow a traditional game announcer.

In the media center, furniture is oriented in a semi-circle, so everyone has a view of the words people are shaping with their hands.

This is the Michigan School for the Deaf building, a brand-new, 80,000-square-foot, 26-classroom testament to cutting-edge educational technology and design.

Staff have been moving from the neighboring old school to the new building this month, preparing for the roughly 150 students who will start a new school year next month.

The signs of breaking in a new building are everywhere; boxes are piled in classrooms, wall brackets await television screens, brown patches of dirt around the building host flecks of grass seed.

“It’s kind of like moving into a new house,” said developer Dave Lurvey, walking through the new building Tuesday.

Lurvey is one half of Flint development team Lurvey White Ventures, which in 2010 was approved to buy the 80-acre campus from the state for $1.3 million. The other half is Ridgway White, the developer behind the Riverfront Residence Hall building.

The deal with the state stipulated the developers could buy the campus, so long as they built a new, cutting-edge school for the MSD. The other major plans for the campus include renovating historic MSD building Fay Hall into a new school for Powers Catholic High School.

Work on Fay Hall started this summer, with Powers expecting to start the 2013-14 year there.

At $36 million, the price tag for the whole project would be the biggest of any one construction project in Flint in at least a decade.

“I think the state realized that they had some aging facilities and were able to come up with a creative solution,” Lurvey said.

Walking through the two-story structure, Lurvey said the technology offerings are what are most exciting about the building.

Most anywhere in the building — all classrooms, even some hallways — are set up for flat-panel TV screens and “smartboards,” which project an interactive display, almost like a giant iPad.

All of the screens throughout the building are connected via a central network. Say there’s a presidential address the principal wants all students to witness: School officials can patch that feed out to all screens, and also send out an American Sign Language interpretation of the speech onto secondary screens.

About half of MSD students stay overnight on campus in a nearby dormitory building, Lurvey said. Previously, those students had to walk outside to get to school. The new building has a connection to the dormitory.

“The most exciting part,” said White, “it sounds like the teachers are excited.”